How to offer public WiFi without torpedoing domestic security

Several times recently, I've been surprised and grateful to find a public WiFi access point in places where I needed to get online and had no other easy way of doing it. I decided that the very least I could do was offer a similar service to the public where I live. However, I didn't want to compromise the security or usability of my home wireline network. This is how I decided to do it.

In broad outline, I separated my wireless network from my internal network by putting it on a third leg of my firewall. I used iptables to keep wireless traffic off my internal network, except where it was authorised. OpenVPN was used to authorise traffic to pass from the wireless into the internal network, and to protect that traffic in the air with strong encryption. Finally, iproute2 was used to restrict the internet bandwidth that unauthenticated wireless users could use. You can read about each of these bits in the firewall, OpenVPN and traffic shaping sections of this document.

Here is the physical network geometry. The mandatory bit is the separation (ie, the firewall) between the wireless and wireline networks; if you don't do that, you can't have public WiFi and security, because nothing's in a position to make sure that packets don't get between wireless and wireline unless they ought to. 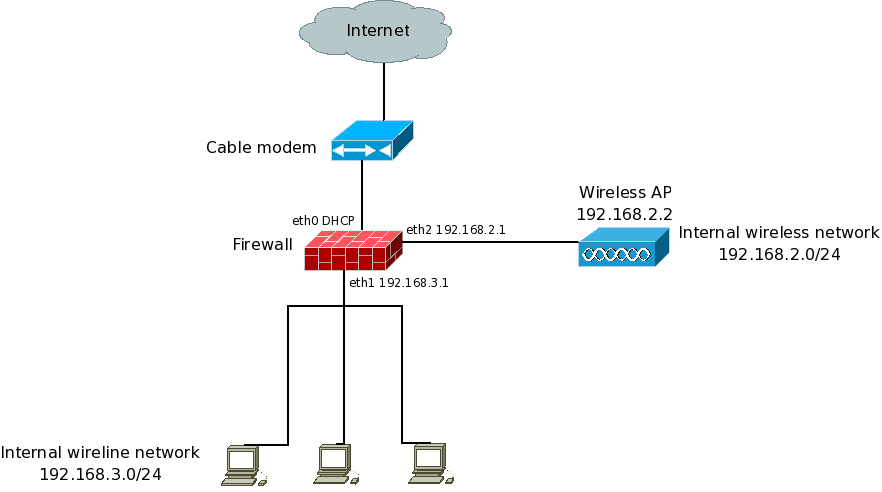 The dia source for this diagram is here.

The firewall is a general-purpose Linux box, not a commodity device. That's pretty much mandatory, too, unless your commodity device is sufficiently Linux-based that you can use these tools. The wireless access point is a commodity device (in my case, a Linksys). It's not doing anything clever at all, not even DHCP, so it plays no role other than a frame translator between wireless and wireline networks. It needs no brain.

The rest of this document assumes you have a setup like the one above already running, with wireless and wireline networks working, the firewall dispensing addresses via DHCP on at least the wireless network, handling NAT between the internal networks and the internet, and handling routing between all three networks. If you don't have that working yet, don't go any futher; build the network first.

The firewall script, in broad outline, allows anything from eth1 (inside) to anywhere else, anything from eth2 to the internet (eth0) on privileged ports (a step I've had to take after some users decided to run file-sharing software 7*24), but from the internet to anywhere and from eth2 to eth1 is tightly restricted (basically, to return-half packets from connections initiating inbound).

Here are some of the FORWARD rules. The firewall also has a tight set of INPUT rules, but those aren't relevant to this discussion (don't forget to allow inbound openvpn connections on TCP port 1194). These lines are taken from /etc/sysconfig/iptables.

OpenVPN is a lightweight, SSL-based VPN that can be used to authenticate an endpoint to a network, and to encrypt traffic passing between the endpoint and the network.

OpenVPN comes as standard on my laptop, as part of Fedora; my firewall is running CentOS 5, and OpenVPN packages are available from Dag Wieers' repository. I advise you to get a packaged version if you can; the version numbers on both ends don't need to match precisely (one client is v2.1, the server is v2.0.9) as it's a stable and interoperable beast.

Your packaged install will probably have the easy-rsa subdirectory as part of the distribution. As the HOWTO advises, this should be copied into some third-party location, and I linked it through to make it easier to access:

Start the service on the server with service openvpn start (and ensure that it runs at reboot with chkconfig openvpn on).

On the client, delete any default route that your DHCP server has handed out to you (route delete default gw a.b.c.d). This is because the openvpn server will try to establish a new default route over the tunnel, and that can't be done if you already have one in place. I configured my DHCP server not to hand out a default route for clients likely to use openvpn, but NetworkManager insisted on assigning one anyway (that was true under Fedora 9, but Fedora 10 seems to have got brighter).

Now, start the openvpn service on a client with service openvpn start. You should see a device tun0 appear on both client and server, eg:

and your client's routing table (netstat -rn) should now say: Note the default route via tun0 in the last line. That's what we want to see.

Now, check connectivity to your wireline network via the tunnel. In my case, I have a desktop on 192.168.3.11; now the tunnel is up, I can telnet to the ssh port on it, and receive an ssh banner:

You should also check that you can't do this when the tunnel is down. If you decide to use ping to do your connectivity tests, make sure it's not being blocked by firewalls on either the client or the server; or both.

I also want to prevent wireless clients from using up most of my internet bandwidth. The tool do do this is part of the iproute2 toolchain, which is already installed on my CentOS box (the package is called simply iproute; the version number is 2.x).

Most of what follows came from this HOWTO, to whose authors I am grateful. I also make heavy use of the hierarchical token-bucket queueing discipline, which is well-documented by its author here. I freely admit that I haven't done much with traffic shaping before, and this is mostly monkey-see-monkey-do; it does seem to work, though.
Thanks to Kathlyn Simmonds at Comparitech for finding and fixing the broken link.

Before I go on, I must emphasise that traffic-shaping only works on outbound traffic from an interface. You can't directly control what you receive; only what you send. All of what follows will appear to be arse-face unless you realise I'm setting limits on what goes out an interface, not what comes in it.

You can interrogate your current queueing setup as follows (I have inserted gratuitous linefeeds for the sake of readability):

This is the default queueing discipline. It does no shaping nor QoS. My queueing setup looks like this: This is done with this shell script; I could embed it into a system startup script (/etc/rc.d/rc.local, in the worst case, I suppose) and I probably will. At the moment, however, it's run by hand.

The vital stuff is that:

The only thing that doesn't currently seem to work is that when I'm using privileged and unprivileged clients at the same time, the unpriv clients still seem to get their ceiling limits; what I want is for them to only get their rate limits when there's contention. Clearly, I need to learn more about HTB and tc in general. When I get it right, I'll update this document.

Back to Technotes index
Back to main page