I bought an Asus S6F at DataVision in New York, since I was in town anyway to see my friend Wes, who had recommended the model to me based on his recent research into new notebooks. It's not the leather-covered model; the only thing I'll pay $500 to cover in leather is myself, when riding.

I was very pleased with DataVision; they allowed me to boot their shop S6F off an FC6 install DVD, and play around with bash commands (lspci, cat /proc/cpuinfo, that sort of thing) based purely on my word that I wouldn't damage the installed Windows. They were also honest with me about the prospects of getting the laptop in time (they were out of stock, but expected a delivery), and they shipped it to me exactly when they said they would. I would happily do business with them again (declaration: I have no connection with them, save as a satisfied customer). 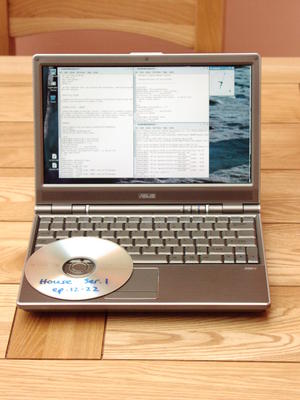 This shows the laptop with a DVD on the keyboard, for scale purposes. It's small, though not as tiny as my lifebook. Then again, it has a CD drive, which makes installing the OS a whole lot easier.

FC6 install from install DVD went like clockwork, even running in graphical mode. I erased all traces of Windoze from the laptop without ever booting it, afaict.

I had a fairly-recent set of FC6 i386 updates on a DVD. I inserted the DVD into the Asus, which mounted it on /media/FC6-updates.

Then I edited /etc/yum.repos.d/fedora-updates.repo and inserted a section

Then I did the following commands from a text console (ie, press ctrl-alt-F1 and log in as root). The first time, I tried the upgrade from an xterm window under the GUI; the SELinux rpm update bounces some element of the windowing system and kills the update halfway. Since I didn't want a half-completed (huge) yum update leaving the system unstable, that meant blowing the whole OS away and reinstalling.
yum --disablerepo=* --enablerepo=dvd update

That ran to completion.

I had already tested the FC6 install in the store, and the graphics card was supported almost perfectly. The screen seemed to be trying to be about two pixels wider than it really was, so got a strange slightly-sliding window effect where moving the mouse all the way to the RHS of the screen jumped the image about two pixels left, and vice-versa on the LHS. This seems to have since gone away, but I don't quite know how I got rid of it.

Later note: having finally hooked the machine up to an external monitor, there seems to be no signal on the external monitor port (on the LHS of the machine). I have not yet tried rebooting the box to see if the port gets "brightened" if there's a monitor there at card reset time (reboot, X startup). The keyboard control (Fn-F8) seems to have no effect.

I checked I had kernel source (rpm -qa|grep kernel-devel), then unpacked the distribution and built and installed the module, as root, with

I can then modprobe r1000 and configure eth0 accordingly. The network seems to work fine, although as I don't have any other gigabit devices, I can't comment on the speed.

I repeated my earlier work, which is described in an earlier technote and I now have a nice encrypted file system on /home.

This just works out-of-the-box. Without any change to grub.conf, from the "foot" menu, system -> suspend works to suspend to memory, and system -> shut down -> hibernate works to suspend to disc. A nice feature: when it wakes up, even if it's seconds later, the screen comes up locked. Combined with encrypted home directories, this will be nicely secure.

There are also hooks for "Suspend" and "Hibernate" on the new GNOME battery applet. These work fine.

lspci says the card is a Intel Corporation PRO/Wireless 3945ABG Network Connection (rev 02). Getting this working requires running non-free software; I am normally dead against this but I don't have any choice given that the hardware is on the motherboard. I also slightly sympathise with Intel's plight, because 802.11 requires a radio, and radios are tightly controlled by governments. In order not to get blasted into the stone age, Intel has no choice but to lock me out of my own hardware. I don't like it, but it's not entirely Intel's fault. If this annoys you, support the GNU software radio project, and press your vendor to use a very open and stupid transceiver to implement 802.11[abg] instead (fat chance).

I went to http://ipw3945.sourceforge.net/, got the driver, and put the source tarball into /usr/local/src/ .

Following the README in that directory (hereinafter referred to as 'the README'), I did

The README refers to /etc/hotplug/firmware.agent, which doesn't exist on my system. To find out where to put firmware, I did

then ifconfig -a showed no new interfaces. That's bad.